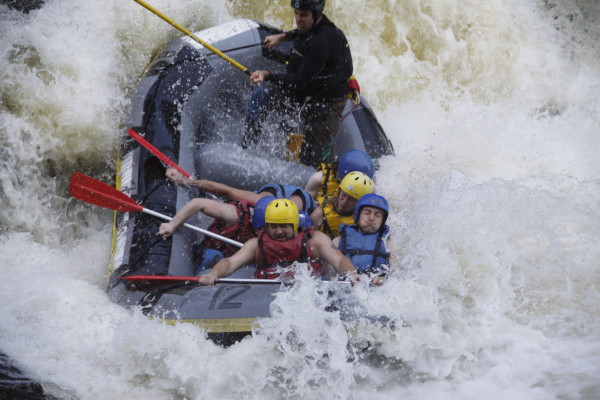 Our close-knit team! Paul, Daniel, Kerrie, David, Doug & Darren with his head between his legs!

We’re just back from our weekend of team building and what a weekend it has been!

All of us are feeling a bit sore from the activities but it was worth it for the memories and the laughter we have experienced together.

We kicked things off straight away by heading to the River Tummel and getting ready for white water rafting. The sun was splitting the sky and the scenery was absolutely stunning…. There wasn’t too much time to sit about in the sun before we squeezed into our wetsuits and headed up the river.

The rafting was a great experience and everyone had to work together as a team. There were a couple of opportunities to jump into the river and have a little swim and some of the team even managed to throw in a little cliff jump too! The water was absolutely freezing but as it was such a lovely day we didn’t stay too cold for long.

After getting changed and having a quick lunch, we headed off in search of our home for the night, the Nae Limits lodge. Some of the team got there a lot quicker than the other half did, a wee satellite navigation input error sent some of us off on a slight detour!

After all arriving it was time for some entertainment from Daniel. Dan split us into two teams and made one person in each team hold a plastic tube which he had sealed at the bottom and drilled holes into. He then instructed us that we had to fill the tubes with water and use whatever we could to block the holes and get the ball that had been placed inside the tube out; the first team to do this would be the winners.

It’s safe to say we all got wet – again – and there were far too many holes for the number of fingers, toes, noses and mouths we could get over the holes to block them…nonetheless it was a good game to get us started on our evening together and got the laughs flowing, just like the water.

So after getting dried – again – It was time for dinner and then onto our pub quiz. Prior to going we’d decided that everyone would take a turn to lead a round with 10 questions relating to their interests or specialist subject. This was a good way to learn new things about everyone and meant that everyone had a turn…..and we definitely did learn things about each other and all had a good giggle without it getting too competitive.

Then it was time for Kerrie to entertain us with some games. Kerrie split us into two teams and gave us each a bag. This bag contained black bags, toilet roll, sellotape and a pair of scissors. She instructed us to pick one person to be a model and for the others to use the materials provided to create the most outrageous outfit they could….she would then pick the best outfit and that team would be the winner.

She encouraged us to be as creative as possible and wasn’t disappointed with the end results…between laughing hysterically she finally picked the winning team and moved onto her next game…..a ‘Kerrie’ version of pass the parcel! This was similar to the version your children will know and love but in-between the layers were ‘truth’ cards that had to be answered and some unusual prizes that probably wouldn’t be suitable for kids….. after that, we definitely all know each other a lot better than we did before!!!

By this point we had had a small glass or two of sherry and chatted in the bar. We’d played a few games of pool and darts and enlightened each other with our eclectic music choices. We were eventually escorted to bed by the ever-sensible David Lawrence as it was getting pretty late….or early in the morning, depending on which way you look at it!

There were a couple of no shows for breakfast and more than a few fuzzy heads but there was no time to suffer, it was down to the Nae Limits centre to get ready for our second activity of the weekend….Canyoning!

This meant getting back into wetsuits and safety gear before jumping on the mini bus up to the Falls of Bruar just behind the House of Bruar. I think some of us were regretting the night before a little when climbing up a hill and looking into a canyon full of ice water. There were slippery rocks, cliff edges and numerous ways to injure ourselves with a foot in the wrong place.

Nevertheless we all soldiered on and made it to the first part of the activity for acclimatisation….basically we all had to jump into a freezing cold giant rock pool to get used to the water temperature. That soon cleared our heads!

It was then a case of working our way along and down the canyon with some pretty incredible obstacles to overcome along the way. The first obstacle being a jump off a ledge, from a height that feels unnatural to jump from, into a pool that definitely doesn’t look deep enough!!

This was especially hard for Darren, whose fear of heights did not help him – but he faced his fear more than once on this trip and we were all so proud of him for doing so. As we were of everyone…not one of us ‘bottled it’.

It was quite a physical activity, in and out of water, swimming, jumping, sliding down natural water slides, pulling yourself up and out of tight situations….and the incredible sights we got to see by taking this unusual route beat hands-down any mere walk alongside the Falls; it was absolutely beautiful.

Arriving at the end of this activity it was clear to see how challenging it had been for everyone – we were all exhausted but had thoroughly enjoyed the experience.

Everyone worked as a team, encouraged each other, helped each other through the obstacles and made the most of some sticky situations. There was a definite sense of achievement and pride for finishing this together and in one piece.

After getting changed and thanking the Nae Limits team for a wonderful weekend of activities, we headed to a local café for our final meal together before heading home. There was the task of handing out some prizes and certificates for everyone’s efforts and a few words from the directors over some food.

What was clear to everyone was that it had been a fantastic weekend where we have shared amazing experiences and bonded together. Now we’re wondering how we can top such a good weekend next year…..

With GM we know our IT systems are in trusted, safe hands, and when we do contact them for help and advice, it’s dealt with quickly and (thank heaven) without any technical jargon!