Windows 10 – Microsoft Releases Details for its Next Operating System 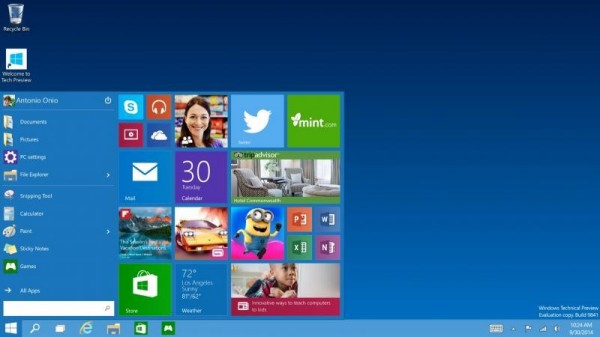 Microsoft plans to release Windows 10 before the end of 2015. Image source: http://upload.wikimedia.org/wikipedia/commons/2/2a/Windows10.jpeg

This week Microsoft announced plans for their next operating system, Windows 10. Now before you start getting confused, you haven’t missed out on Windows 9! Microsoft has simply decided to skip a number and make Windows 10 an operating system with the wow factor.

As Microsoft Certified Partners we thought we’d provide this guide to let you know the latest developments this release will provide.

A brief history of Windows

Windows has been an industry-leader in the computer market for so long that many people won’t remember life without it! From launching their very first operating system, Windows 1.0 back in 1985, to the announcement of plans for Windows 10, Microsoft have come a very long way. Even today, Windows is still the world’s most popular operating system and has enjoyed huge success over the years, but not without a few bumps a long the way. However, it is those little bumps in the road that has made Windows the strongest and most powerful operating system to date.

In 2012, Microsoft launched a brand new operating system called Windows 8. This operating system introduced major changes to the platform, with a brand new user interface that was designed to improve user experience on digital tablets. Whilst the design was certainly innovative and exciting, many businesses were put off using it as it looked and functioned very differently to the existing operating systems they were used to using e.g. Windows 7 and XP.

A study by research firm NetMarkershare found that just 13.4% of people were running Windows 8 or the updated Windows 8.1 on their desktop PCs, whereas 51.2% were still using Windows 7 and 23.9% using Windows XP, an operating system that is no longer supported by Microsoft.

With all of this information in mind, Microsoft decided it was time to develop a new operating system, one that had the ‘wow’ factor users were after.

The Windows 10 software will run on a wide range of devices, from smartphones and tablets to PCs and Xbox games consoles. All of the applications will be available to download from a single store. More information will be released about the introduction of Microsoft’s universal apps (individual programs that adapt to different types of devices) at its Build conference in April next year.

The Start button is back!

Microsoft will also be reintroducing the ‘start’ button, which was removed from Windows 8. Many people believe that the ‘start’ button is crucial to the success of Windows 10, as it is a function that desktop users are familiar with and will hopefully encourage more business users to install the new system.

An OS for business users

Speaking of business users, Microsoft is clearly marketing Windows 10 at enterprise and corporate customers, many of which were previously reluctant to upgrade to Windows 8. Windows 10 has been designed to be more intuitive and easier to operate with a mouse and keyboard, as even in a world full of tablets and smartphones, PCs are still the dominant technology in the business environment.

As well as offering a list of the user’s favourite applications in the start menu, they will also have access to resizable tiles that will provide notifications from relevant apps, such as new emails, Facebook messages and weather updates. The tiles will be very similar to those featured in Windows 8’s touch-optimised interface on PCs and tablets.

The operating system will respond to the type of device it is being used on, unlike its predecessor, which required users to switch between desktop mode and touch-screen mode. After determining whether you are using a keyboard / mouse on a PC or laptop or touch operation on a smartphone or tablet, the operating system will dynamically adjust it’s interface and behaviour accordingly.

Microsoft still firmly believes that two-in-one devices e.g. laptops with detachable screens that become tablets, are the next big thing. With this in mind, the company is ensuring that Windows 10 will be built to accommodate this hardware type specifically.

For example, when a user detaches the screen from their laptop to turn it into a tablet, they will be asked if they want to switch to tablet mode. They will then be able to use a touchscreen friendly interface, familiar to Windows 8 users. Clip the screen back on and they can go back to using the PC-friendly interface, suitable for using with a mouse and keyboard.

The best of both worlds

The idea behind the design of Windows 10 is that the system will feel familiar to both Windows 7 and Windows 8 users. It will incorporate the best of both platforms and will be released before the end of 2015.

Many people will be left wondering why Microsoft has decided to call its latest operating system Windows 10 rather than the more logical Windows 9. According to Terry Myerson, the Chief of Operating Systems at Microsoft, the name Windows 10 resonated best for what the company would be delivering across all devices.

Microsoft will be unifying the Windows 10 brand; with the name also suggesting that this is more than just your average update, it’s a fresh start for the company.

Microsoft is currently in the midst of launching its ‘insider program,’ which will allow people to test the technical preview of the new operating system. A consumer preview of Windows 10 will be coming early next year and the final build is expected to be completed mid-2015.

Microsoft is keen to give enterprises an early look at Windows 10 before the public, so that companies can get used to the new software before it launches. The company plans for the operating system to be easier for IT workers to manage across all devices. They will also be giving them the option to create customised internal app stores so their employees have easy access to apps approved by their companies.

It is clear that Microsoft is listening to what users want by developing a brand new operating system to rival all others. With successful execution, Windows 10 will be something special and here at Grant McGregor we are really looking forward to seeing how Microsoft’s plans develop from here onwards.

Clearly upgrading to Microsoft Windows 10 will require some thought and planning, call us today to begin the planning process for your future upgrade.

Our decision to move forward with GFI was helped in no small part by the excellent service provided by the team at Grant McGregor - GFI Webmonitor was one of the easiest software roll-outs I've encountered.