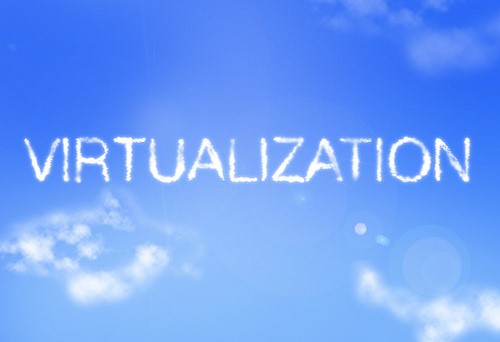 Over the last few years we have seen many new technologies emerge and thrive, including server virtualisation. This game-changing technology has allowed many businesses to improve their efficiencies and increase their capabilities, meeting goals that would not be possible when constrained within a physical environment.

What is server virtualisation?

Server virtualisation is a technology that involves separating a physical server into small ‘compartments’ or ‘virtual servers’. The purpose of this is to make effective and efficient use of the whole of a server’s resources, such as processing power, RAM and disk space. In the past, such server resources were often under-virtualised except for short periods of heavy activity or were over-specified ‘just in case’.

Think of a physical server as a serviced office building. Each floor hosts a different tenant company that is unrelated to other tenants, except that they share the same resources, such as lighting, reception and stairs. In server virtualisation, clever software is used to create these virtual server spaces and to share out and manage the allocation of server resources as appropriate. Let’s see why…

Today the majority of virtualisation solutions boast much more advanced features than those typically fold on physical servers. These advanced features allow businesses to reduce downtime and benefit from increased uptime. Most server virtualisation vendors provide a number of services including live migration, storage migration, fault tolerance and high availability, which give virtual machines the ability to quickly recover from any unplanned outage. If one virtual server goes down, the virtual server can move quickly and easy to another, allowing businesses to carry on with their operations.

Server virtualisation allows organisations to build an effective disaster recovery solution. The first way it does this is by removing a company’s dependency on a particular hardware vendor or server model. Instead of having to keep identical hardware on hand to match the production environment, IT departments can simply buy cheaper hardware for disaster recovery.

Seeing as server virtualisation consolidates servers down to fewer physical machines, organisations can create more affordable replication sites. Virtualised server platforms also use software can help to automate failover when disaster strikes. This software also allows businesses to test their failover plans so they can have the peace of mind that if disaster strikes, they are fully prepared for recovery.

Server virtualisation prevents businesses from having to tie themselves to a particular server vendor or model. It takes away the underlying hardware and replaces it with virtualised hardware, allowing businesses to benefit from increased flexibility in choosing server equipment.

4. Isolate and extend the life of applications

In the past, if you wanted to isolate an app in the physical world, you would have to adopt a one app, one server model. This often led to increased costs and under utilised servers.

The great thing about server virtualisation is that it provides application isolation and removes any compatibility issues by consolidating a number of virtual machines across fewer physical servers. This allows businesses to cut down on server waste by ensuring their servers are fully utilised and keep their costs to a minimum.

If you have software and applications that don’t run on modern operating systems or newer hardware and there isn’t any way of updating it, you will be able to virtualise it and encapsulate it in its environment. This will extend its life and prevent you having to hold onto old pieces of hardware that are taking up space in your office.

By consolidating several machines into a single server running multiple virtual environments, you can reduce the amount of hardware you require in your office and therefore save on space. In a world where office space is very expensive, every square inch counts!

6. Save on operational costs

Last but not least, server virtualisation will help you save on operational costs. By lowering the number of physical servers in your workplace, you will reduce hardware maintenance and benefit from lower energy bills. Not only that but because you will be using less energy, you will also be able to improve your business’s green credentials!

How many servers are you currently using and managing?

One newly-joined GM client had 15 servers for around 20 staff when we inherited them. We’ve now consolidated this down to just 6 servers using hardware they already had, saving them space, money and power, just as we’ve described above.

Call David Lawrence on 0131 603 7910 today to request a free server virtualisation review to see how much you could save.

WhatsUp Gold is very impressive and configurable to do exactly what you want in the way you want to do it! Grant McGregor Ltd provided excellent service throughout the procurement process before, during and after...