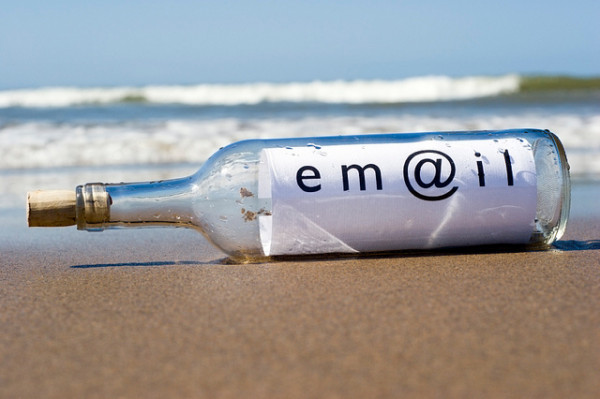 Sad news this week that Ray Tomlinson has died at the age of 74. Most people might ask, “Who’s he?” and yet he is credited as the inventor of email and the man who chose the @ symbol to enable people to send person-to-person messages to other computer users on other servers.

Now, in today’s digital age, the most common form of communication is email with over 200 billion emails sent every day!!

Email has been around since the earliest days of the internet and actually predates the world wide web; and whilst it’s incredibly quick and efficient, email is unfortunately not a guaranteed communications medium. Things can go astray, which can result in orders being lost and relationships being strained.

The worst part about not receiving emails is that you won’t necessarily know about it until it’s too late and you’ve lost a communique or worse still, an opportunity. But before you assume you’ve got a systematic problem, there’s a number of simple checks you can make first…

If you find that you’re not receiving emails then run through the checklist below for some of the most common reasons that this might be happening:

• Not allowing enough time – Although email is usually thought of as being an instantaneous form of communication, this isn’t always the case. If you’re expecting an email, then you shouldn’t assume that it will come through immediately. Your email may be relayed through several hops from one server to another en route to your server.  In most cases, email does go through very quickly but sometimes it can take a few hours to get through so always allow enough time before chasing it up.

• Connection problems – Sometimes the reason for not receiving emails is a wider problem. For example, if there’s an issue with the internet connection in the building or with the sender’s connection or a broader connectivity problem. You might check if anyone else in your organisation is having problems with email or web access in order to rule this out.

• Sender doesn’t have the correct email address – It’s very easy for small errors to prevent email from going through properly. If you provided the sender with your email address over the phone, then it’s possible that they might have typed it in wrong. Not everyone follows the same address formats.

• Email was saved as a draft by mistake – It’s also possible that the sender may have saved the email as a draft rather than sending it. Even if it’s in their ‘Sent items’ folder, that doesn’t necessarily mean it went through correctly and has left their email systems and filters successfully.

• Emails are marked as SPAM – Good email service providers have sophisticated SPAM filters that detect which emails are legitimate and which are not. However they’re not always 100% reliable and sometimes legitimate emails can get caught in the net. To avoid this, you should check if any emails from people you know are getting moved to your SPAM folder and, if so, mark them as safe.

• The emails contain an attachment – Emails that contain attachments can sometimes be blocked too. Although common file types such as Word docs, PDFs and Excel spreadsheets usually get through; even they can sometimes cause problems. When Word/Excel documents contain macros they are blocked but this is for good reason as there’s a very real danger of malware being smuggled in through the macros. In the case of large attachments, it’s highly recommended that you use a secure file transfer application rather than zipping them. This is because ZIP files can be used to deliver and unpack malware such as CryptoLocker and CryptoWall.

• The email is sent to a group address – If your company uses group addresses such as sales@ or support@ then it’s possible the email could have been sent there, rather than to your personal inbox. Check who else is in that group as they may have received it.

• Outlook settings – You should check that you don’t have any Outlook rules set that might be moving or blocking the email or quarantining it. Check your Junk and Clutter folders to see if certain emails are being moved there. If they are, it will often be because they contain SPAM words or attachments that Outlook doesn’t trust or because Clutter is attempting to ‘de-clutter’ your Inbox by ‘learning’ what you do and don’t want. You can even ask the sender to send just a blank email to check if it arrives successfully.

Email isn’t just a problem when you’re not receiving messages though. It’s just as problematic if emails you’re sending aren’t reaching their destination.

Misspelling of email addresses is a very common reason for emails not being sent. It’s very easy to miss out a letter or a dot in an email address, which will result in it not getting through. You should always double check addresses when you’re sending to a new recipient to avoid this.

Back in 1971, Ray Tomlinson could never have imagined how powerful his invention would become, nor the many ways in which email is used, abused and confused today. But whilst email may not be perfect, we’ve not yet found anything better!

If you have run through the checklist above and still require assistance, log this with our ServiceDesk  and provide the relevant email addresses (Sender or Recipient), the date and time the email was sent and any other relevant information such as Non-Delivery Reports.

And if you’re not yet a client but this is the kind of professional IT Services you’d like to enjoy, then REQUEST A CALL BACK here.

I would just like to say a big thank you for all your help, support and patience over the past few months with all of our IT changes. I know it's not always easy when you are helping us all Quality Scotland but you got us there in the end!